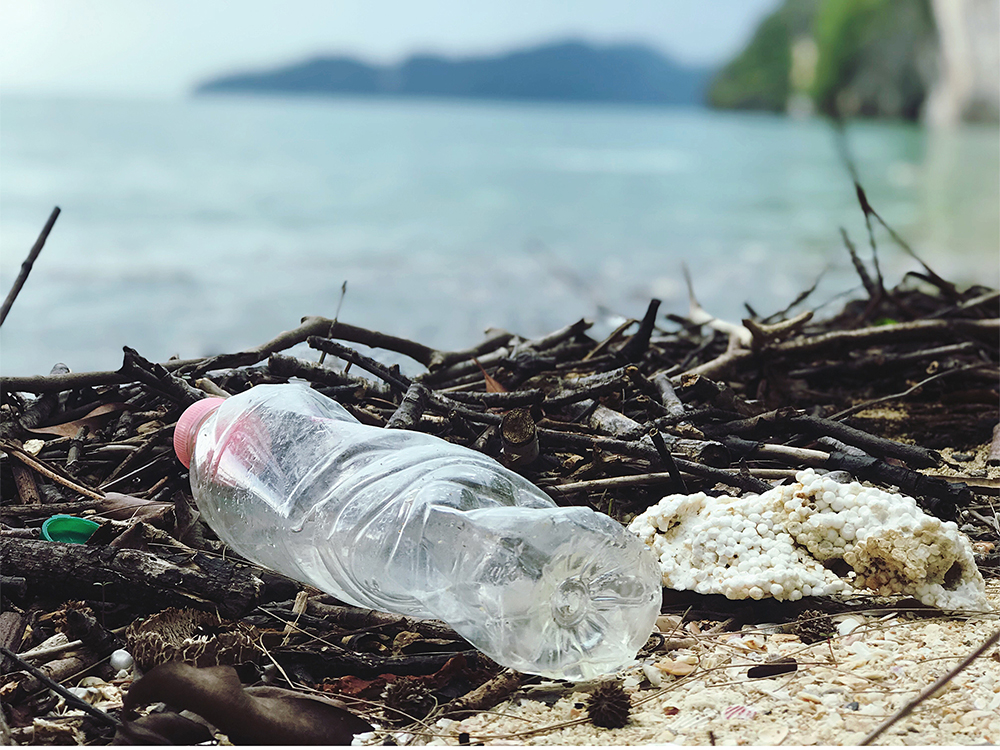 On Friday, the 13th of November, the Plastic Atlas Inter-school Competition took place through a Zoom meeting, and was also livestreamed on Facebook.

This event, hosted by Thant Myanmar, brought students from different international schools in Yangon together as they each presented an environmental issue prevalent not only worldwide, but also in our very own city. They also brought forward several innovative ways to tackle these issues through proposals for future actions. 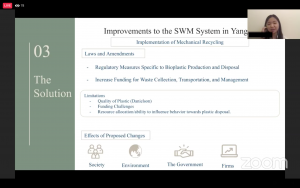 Thant Myanmar is a Yangon-based nonprofit organization born out of a movement against plastic pollution.This organization strives to help Myanmar reduce its dependency on single-use plastics by raising awareness of the detrimental effects they have on the environment and by supporting the use of sustainable alternatives. Recently, Thant Myanmar has partnered with the Heinrich Böll Foundation, a German human rights and environmental organization, to write a book called the Plastic Atlas.

This book is a response to the beginning of understanding the “huge dimensions” of the plastic crisis, and how we as society must possess “in-depth knowledge of the causes, interests, responsibilities and effects” the plastic we use has on our lives and on our planet.

To promote the valuable content of this book, Thant Myanmar and the Heinrich Böll Foundation decided to host a Plastic Atlas Inter-school competition that invited students from all schools in Myanmar to choose one chapter of the Plastic Atlas and present both its content and potential solutions to tackle the issue at hand. 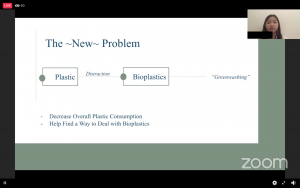 Out of more than 29 students who sent in applications for this competition, only six were chosen as finalists who presented on the Facebook livestream in front of an audience of over 80 people. ISY’s very own Bridget (G10) and Himari (G11) were among these six finalists. Before reaching this final round, they worked very hard through a series of steps leading up to being selected to present at the event.

The first step was to choose a chapter from the Plastic Atlas and create a presentation about the topic of choice, which then had to be turned in for review from the Thant Myanmar organisation. As Himari recounts, “Our research was primarily based on the Plastic Atlas, which was helpful for narrowing down the issue. I focused on Bioplastics, and Thant Myanmar provided data to help us start our research. Forming a solution for the issue in Myanmar specifically was a unique experience because it involved looking past the general environmental issues in school, and applying our findings to a real-world situation.”

Mahatav (G11), who was also one of the applicants for this competition, also shared how meaningful the research stage of his presentation was. “I learned that plastic is, for the most part, not fully recyclable. Even if you were to put a plastic bottle into a machine to “recycle” it, you cannot turn a plastic bottle into another plastic bottle – you can only turn it into a weaker version of itself. You just can’t make it into the same water bottle anymore.”  He continued to share with Global his findings, recording:

Even if we recycle it, we still release greenhouse gases into the air – we are simply adding to carbon emissions to merely extend the life of plastic for what? 12 minutes. It is difficult for me to make sense now as to why we still use this single-use material.

You just cannot recycle plastic – instead, we must minimise its use and get rid of it from our society as a whole.”

After the applicants’ first presentations were submitted, a selected number of students underwent one-on-one interviews with Ms. Nitika Bhardwaj, the education director for Thant Myanmar. From these interviews, the six finalists were selected and had personal meetings with Ms. Bhardwaj to discuss how to improve their presentations for the grand finale. A few days before the event was held, the finalists came together with the Thant Myanmar and Heinrich Böll Foundation teams to run through the presentations beforehand. Bridget told Global about how she, “learned a lot not only from researching for the presentation, but also from getting feedback from the people at Thant Myanmar and watching other people’s presentations.” She also mentioned how, “it was very nerve-wracking to present in front of people who had influence to make significant change, but it was also quite exciting.” 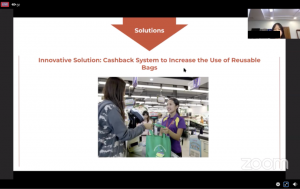 On the morning of November 13th, the Plastic Atlas Inter-school competition finally took place. The presenters and judges from WWF Myanmar, Myanmar Recycles and City Mart Holding assembled in a Zoom meeting, which was live streamed on Thant Myanmar’s Facebook page. Each student was allowed 8 minutes to present, followed by a “Questions & Answers” session with the judges. In between presentations, hosts from Thant Myanmar kept the Facebook audience engaged through live trivia on environmental issues and recycling techniques, to which audience members commented their responses. After all finalists had presented, Thant Myanmar sent out an online voting poll where viewers could vote for their favorite presenter. Following the voting procedures, the judges themselves came to a consensus on the top three winners of the competition.

Congratulations to Himari who came in 3rd place and earned a 2-week internship with Thant Myanmar! And congratulations to Bridget and Mahatav, who have made ISY proud with their engagements and tireless efforts.

“From this experience, I hope that I can get more comfortable about getting my point across to people about the things that I strongly care about. I hope I can improve the way I can make an influence, like the judges and the winner of the competition can,” Bridget asserted. Himari further reflected on her experience by telling Global that “the other finalists had interesting presentations, and focused on the issue from other perspectives than my own.

Even though it was a competition, it felt more like a community gathering to share ideas on a problem that we were all passionate about.”

You can watch the live stream here. 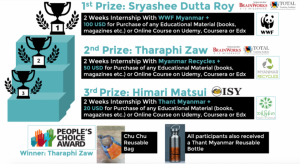